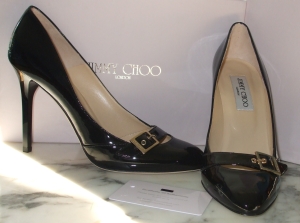 Behold my first pair of designer shoes. Kevin gave them to me on our second Christmas together, and I proudly proclaimed them my first pair of “Choos”. People were amazed that he could pick them out for me, but I was a loyal fan of “Sex and the City” at the time, and must have done some casual label-dropping. I just didn’t realize that he was paying close attention. The fact that he also picked up on my preference for Mary Janes just made the gift that much more impressive. I felt like an animal-lover who had stumbled upon the opportunity to adopt a full-bred, fancy dog. I was not and am not a snob about shoes (or dogs); I just found myself face-to-face with magnificent beauty and couldn’t resist.

I certainly never expected to own a pair of shoes like this, much less have them purchased on my behalf. Unwrapping them was overwhelming: they were swaddled in a Jimmy Choo velvet bag, which was nestled into a pristine Jimmy Choo box, which was packed with care into a fancy Neiman Marcus box, which was gift-wrapped and adorned with an elegant keychain. The packaging alone made me feel like a princess.

I will go ahead and admit that I went online the next day and figured out how much Kevin spent on the shoes. I will not be rude enough to post the amount here. If you know shoes, you know how much. If you don’t know shoes and are curious enough, you can look it up on your own. Suffice it to say that I was humbled and almost embarrassed, feeling unworthy of the magnaminous gesture.

You may think that shoes of this caliber would remain safety enshrined in the aforementioned bag/box/box packaging, until an occasion of some merit arose during which I could justify wearing them. You would be wrong: I was happy to wear them to work on a regular basis. The first time I wore them, I thought about the price with every step, keeping a keen eye out for stray puddles which would mar the flawless finish. On subsequent wearings, I still thought about the price and the puddles, just not as often. I was most often acutely aware of the shoes while traipsing through the shop, walking underneath cars being repaired on a lift. I knew it was wrong to be wearing them to a car dealership, but trying to keep them at home in a box proved very difficult.

Finally the sad day arrived when I realized I may have rationalized one too many times. They were starting to show their wear; the tip of the heel was almost gone. (Yes, even the tips of the pricey shoes work down to nubs.) The problem with this situation is the lack of high-end shoe repair places. I couldn’t imagine taking them to Hakky shoe repair in the mall. I had once been reticent to trust them with my $100 pumps; how was I going to trust them with my precious Choos? With my $100 pumps, they had insisted that I leave them in the basket on the counter and return “in about an hour”. I told them I prefered to watch and wait. They argued that there were many shoes in line ahead of mine. I reluctantly left, feeling like I had just allowed a stranger to pet-sit for me. I sadly strolled through the Mall with visions of returning to the Hakky counter, where they would force me to take someone’s Payless shoes and insist that they were the same ones I brought in. It didn’t happen – my shoes were fine –  but until I can find a way to entrust my Choos to a reputable Choo-repair establishment, they will remain on temporary hiatus in their fancy velvet pouch.

I have received other designer shoes from Kevin since then, including a pair of the “urban shoe myth”, a reference only SATC fans will recognize. While I realize that this likely qualifies me as officially spoiled, I try to remain in humble awe of any designer shoes, recognizing them for the works of art that they are, and appreciating all of the shoes that I own, regardless of their pedigree.