I once lived in this small gray duplex on Holden Street, tucked in near Richmond Academy off of Walton Way. You can see my former unit, “B”, on the right, with the “Beware of Dog” sign. It wouldn’t suprise me if there really wasn’t a dog, and that the sign was just a desperate attempt to thwart potential theives, since the neighborhood has had some crime issues. But I get ahead of myself. It wasn’t always that way.

When I lived there, in the early 2000’s, I wasn’t afraid of the neighborhood. It was nothing compared to the dive I inhabited near Piedmont Park in Atlanta in the 90’s. That midtown apartment was at the back of a house, bordering a dangerous part of town, and there were few street lights. At the end of the late shift, I would make a mad dash from my car, crawl over the porch banister, scurry to unlock the door and get safely inside. I even had a hidden place to sleep inside a walk-in closet. Holden Street wasn’t like that. I parked right in the front yard, walked to the door without fear, and gave little thought to break-ins.

I did give thought to climate control, however. The apartment had two window AC units that only partially abated the stifling air in summer, and a small floor heating system that spewed out so little warmth in the winter, that I never turned it on. In the coldest months, I crawled into a little cave made with blankets surrounding the bottom of my bunkbed, shivering in my pajamas covered with a heavy coat, my cats nestled about me. Taking a shower was torture. I had the maximum number of space heaters I could use without throwing the breaker, and was completely inactive from the moment I arrived home until it was time to talk myself into the dreaded shower each morning.

We all get used to the conditions we live in, and I learned to adjust and adapt on Holder Street. It was not a particularly happy time in my life, which I don’t blame on the home (unless there is something to be said for Feng Shui). When I think back on my time there, I recall sad times, money problems, boyfriend drama and cat health issues. I ended up there because of my credit status; no respectable apartment complex would welcome me. I visited the Circle K daily to buy ramen noodles, diet coke, cheese danish and cat food. Rare treats included canned ravioli or a trip to the nearby KFC.

Although I kept my normal relationship with the neighbors (I’m known to be the girl who will only give a slight wave or a head nod), I somehow learned one day that the houses on both sides of me had been broken into. I looked over to where a plastic bucket sat propped upside-down beneath the window of the home to the right (seen here-the window on the side of the house next to the bush). That was the window they used to access the place. That was the window which was spitting distance from my living room window. Someone stood on that bucket to get into the house, and it still sat there in all of it’s guilty green glory. I was horrified. 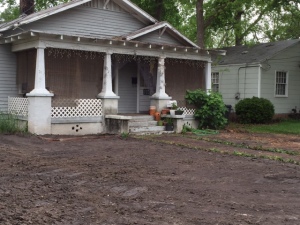 I immediately called my landlord and told him I had to move-right away. Not tomorrow, not next week. NOW. I made it quite clear that my cats and I would not be spending another night in that place, thinking about that green bucket, which could be so easily moved. He showed me a couple other options in his portfolio, but they were equally scary-looking. It was time to see if a traditional apartment complex would accept me back into their world.

I reached out to the people at Forest Hills further up Walton Way, close to campus. By then, in 2004, I was poised in a slightly sturdier position. I had just started working at the Lexus dealership and earned a bit more money. Mr. Hudson had personally assured Lexus Financial that they could lease me a car with no concerns, which helped me re-build my credit. Forest Hills accepted me into their only open unit, and I moved in with the help of my dad and a strong co-worker. My cats and I were safe, and a new era was in front of me.

I’ve come a long way from Holden Street in the 12 years I’ve worked at Jim Hudson Lexus. The dealership has been good to me, and I’ve clearly made better relationship and life choices since then. The journey from coldness and fear to warmth and security is one that formed the person I have become. I pass Holden Street often, and the neighbors have all surely changed. The guys hanging out on the porch of the house next door didn’t pay much attention to me when I pulled up to take these photos. They just saw some strange lady in a Lexus, not realizing that I was re-visiting my old home. Although it is not far from where I live now, it is truly a world away, but I will carry the memory of those struggles with me always.