More than 20 years ago, I cared for a baby bird who fell from a nest at the Saturn dealership. I named it Fred, (pronounced “Fwed”), and cared for it from helpless infant to independent adult. Once it became clear that the bird was ready for freedom, I released it at my Dad’s house, harboring the fantasy that I could visit anytime in the future, gently call out “Where Fwed?” like I had done constantly for weeks, and it would land on my shoulder in the same way it had in my house. I pictured being involved with Fred for the rest of his life, making sure he always had food, and demonstrating a bond that defied nature.

As you can imagine, my hopes were dashed on release day, when Dad and I opened Fred’s cage and it flew away, never to be seen again. Despite many calls of “Where Fwed?” into the void of Dad’s lovely garden, my shoulder remained as empty as my broken heart. I knew I did right by Fred but also missed him greatly. I still think about Fred anytime I see a small brown wren sitting on a branch, wondering whatever became of the bird that consumed my life during those weeks in the late 90s.

Because of my experience with Fred, I knew not to expect a lifelong bond when I assumed responsibility for an injured rabbit at our dealership last week. I accepted that I would become enamored of the bunny, who would likely only tolerate me during our short time together. I pushed the thought out of my mind and focused on the present, promising to do right by the animal and not be selfish, understanding that I would want to keep it and that it would want to be free.

Kevin had texted me a picture of the rabbit they captured in the shop, and I went right up to them and bossily snatched the box from the hands of the technician who caught it, assuming that I would be the person to care for the frightened critter, despite the fact that there are over 100 other employees in the dealership who could have easily done just as well.

Perhaps my bossiness could be overlooked, given the circumstances. In addition to my Fred experience long ago, I had been seriously embracing my inner Dr. Doolittle lately. In the past month alone, I had cared for an injured bird and rescued kitten, both discovered at the dealership in similarly dire circumstances. This young rabbit, the latest addition to the Lexus animal menagerie, made a magical appearance by bounding out from the engine compartment of a customer’s car and onto the back of a surprised technician.

I knew right away that the small brown bunny was injured: I could see a large gaping red patch of flesh between the shoulder blades. I suspected that something in the engine scraped the rabbit’s back, which was completely devoid of any skin in that spot. My immediate commitment to the animal was to care for the injury and provide safekeeping for now; there would be plenty of time later for decisions regarding final outcomes. 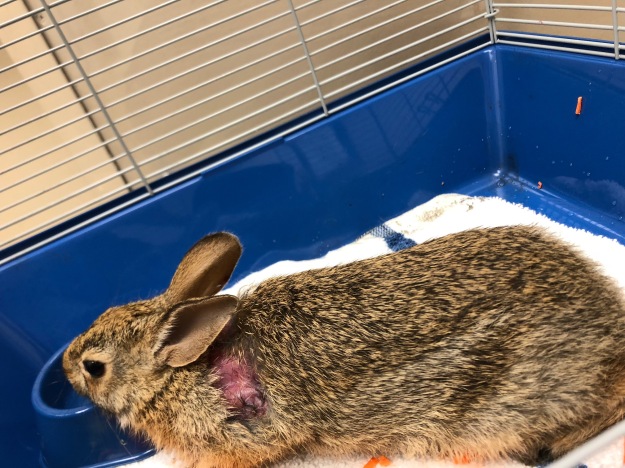 After many attempts to find the right veterinary partner for my patient, it was determined that surgery was in order, followed by a week of recovery, including the dispensing of meds. Dr. Boucher was the perfect professional to advise me. Rabbits are high stress animals, she explained, and wild rabbits cannot be domesticated. Too much stress can easily give a rabbit a heart attack, so calm nurturing followed by a release to nature was the ideal path. She had a financial estimate prepared for me, and I had a budget in mind which would determine the rabbit’s fate. If the quote for surgery exceeded my funds, some painful decisions would have to be made.

Fortunately, her quote came in slightly under my pocketbook threshold, so we proceeded with the surgery. I left the unnamed orphan in her care, whom they labeled as “stray rabbit Maskey”, and went to the pet store to purchase supplies. At this point the budget pretty much went out the window. I purchased the vet-recommended Timothy hay and rabbit pellets, as well as the largest rabbit cage I could manage (some assembly required). By the time the rabbit came to my home, it had a large condo filled with food, water, treats, bedding and a cubby area to hide during stressful moments.

“Stray rabbit Maskey” was the name I gave to the pharmacy tech when I went to pick up her meds. Upon realizing my quest, the tech graciously discounted the final expenses for blown-open budget. I offered to name the rabbit after her in appreciation. She giggled, and said, my name is Amanda. From that moment on, so was the rabbit’s.

My week with Amanda was delightful for me and, I imagine, torture for her. I got to care for an adorable creature, she was forced to endure gentle pets on the head in exchange for free food and pain medicine spurted gracelessly into her mouth. Kevin hooked me up with a camera so that I could watch her every move, and “Rabbit cam” was born. Cute video updates to Facebook and Instagram kept Amanda’s fans informed on her progress. In the span of one quick week, we all watched her chew, groom, stretch, and rearrange her condo. In addition to the clips already posted on my Facebook and Instagram pages, I offer this snippet captured by #rabbitcam. I call it “I Meant That”, showing her falling off her ledge but acting all cool about it.

One moment which was not caught on camera throughout this ordeal was an episode entitled “The Great Escape”. I must have let my guard down one morning, or perhaps Amanda found a momentary surge of bravery. During my usual food refilling and cage cleaning, she bound out the condo door with the same zeal she used to escape the engine compartment. In that moment, she turned into a pinball. She was zinging from wall to ceiling to wall to window with a velocity that belied the calm days she had just spent lollygagging in the condo. I was acutely aware in this moment that I could name the animal and spend all the money and time I didn’t have to give, but nothing would change the fact that THIS RABBIT IS WILD.

I was able to catch Amanda and place her back in the condo, but I knew that the time had come for the sutures to be removed and the rabbit to be released. I carried the entire condo to Dr. Boucher’s office (thankfully it was on wheels), and Doc proclaimed Amanda healed and ready for new life. I returned home, forlorn. Despite my mental preparations warning myself otherwise, I was fully in love with this adorable critter. I used the rainstorms as an excuse and postponed the release for another day, not wanting the trauma of bad weather to make it harder for both of us.

This Sunday morning at 645am, I knew the time had come. It was quiet and I was ready. I wheeled the condo to the screened in porch, placed the rabbit cam strategically, and opened the porch door. Amanda was hiding in her cubby as I quietly opened her condo door and let it rest in the position that creates a down-ramp for easy exit. I silently let myself back in the house, not wanting my presence to add to her stress. I watched from inside the house, knowing that I was in for a wait.

At 6:55am she poked her head out of the cubby hole and froze. She sat motionless, looking out into the expanse of her potential freedom, but doing nothing. I watched her, imagining the decision-making or courage-summoning going on in her mind. A constant source of food, medical care, love and safety surrounded her. A world of birds, fresh air, grass, other rabbits, spacious land, unpredictable weather and predators offered an alternative future. It’s not unlike the conundrum we all face, essentially. There are the safe restraints of the familiar versus the dangers of unknown adventures. For Fred, it was no decision at all. He was born to fly, and he flew right away. Rabbits, however, are high-stress creatures. Amanda was immobile in her moment of trepidation, and I was watching in sadness from the other side of a pane-glass window.

At 8:01 she tentatively crossed the threshold, stepped down the ramp and ran into the porch area. After brief exploration of the porch, she bounded out the open door and into the yard. At 8:03 she was gone from our sight, and despite the condo which remains in place in case she wishes to return, the Rabbit cam is quiet. All that is left is me knowing I will be looking for her in every bunny in our rabbit-centric neighborhood, every small movement in our backyard. I will be asking “Where Amanda?”, knowing there will be no reply, and hoping, as always, that I did right for the animal I was trying to help.