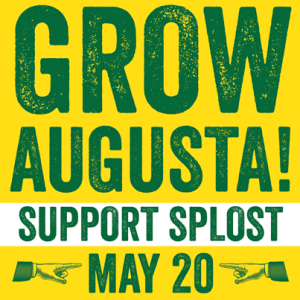 It was bound to happen, sooner or later. When my friends and I decided to start a pro-SPLOST Facebook page, we knew there would be challengers. I didn’t expect it on day 2, but I also didn’t expect to get over 90 “likes” by day 2, either. So I guess we’ve got people’s interest, anyway.

Our strategy for managing the negative posts is simple: Respond if Reasonable or Remove if Ranting. We certainly welcome a healthy dialogue to the pros and cons of the issue, which we knew would be a little controversial, because of that dreaded 3-letter word (T-A-X). More on that later.

I cannot decide if Tom’s postings qualify as Reasonable or Ranting, so for now I will give him the benefit of the doubt. I know it is not likely that I can sway Tom over to my point of view, but I have to try. He posted 5 times in succession, which may be a strategy to get people to read everything, since we all have a short attention span on Facebook and rarely make it past the second sentence. Smart approach, but it feels a little bit like the kid on the playground who keeps poking you in the chest, until you respond or walk away.

Tom brings up valid questions, however, so I will put in some comments for his (and other people’s) consideration. The first and most important thing to address is his last question, which leaves no doubt regarding his point of view. TAXES. Nobody likes them, but SPLOST at least is a tax on everyone, including visitors from out of town. Without SPLOST, there would have to be a spike in property taxes, which is far worse. The Special Purpose Local Option Sales Tax which we will be voting for on May 20th is a continuation of a penny tax already in existence. The strategy behind the current SPLOST package is not about a traditional tax that pays for your infrastructure. It is about an investment that encourages future growth of our city, and brings in the ever-attractive “OPM”-Other People’s Money.

Who are the “OP”? Let me give you 3 examples. The first is related to the Miller Theater on Broad Street, who is courting a foundation outside of the city. That foundation has indicated interest in the project if the city and voters also show their support for the endeavor. Foundations, like businesses looking to relocate here, like to see a city that works together to make things happen. Working on behalf of SPLOST shows we want to invest in new projects that will take our community to the next level.

The next is the biggie: the GRU cancer center. Even if you are normally against this kind of tax, or you don’t understand the economic development impact of supporting the arts, or have issues with some of the line items in the package, it is hard to argue that the cancer center will bring in a value of $300 million to the city. That includes grant money and people visiting for treatment. Making sure the cancer center happens should be a unanimous concern for all of us, particularly because the state of Georgia (and the African-American community in particular) is under-served when it comes to cancer treatment and research.

Finally,  “OP” are tourists. By having amazing attributes such as the Augusta Canal, Phinizy Swamp Nature Park, a theater district in a thriving downtown, and a History Museum telling stories about Masters history and James Brown, we can offer tourists a diversified portfolio of entertainment, education and culture. These entities can often sustain on their own, but when they want to expand, they need some support from the community to do so. They provide the kind of interest, charm, beauty and heritage that inspires pride in the residents (current and future) and entice visitors to return.

Tom, I know I didn’t answer all of your questions, but hopefully I did address the one big underlying question hidden in your posts: WHY. With 4,000 new jobs coming in to Augusta as part of the Fort Gordon Cyber Command (bringing predictions as high as 15,000 people moving to Augusta in related industries in the coming years), investing in all facets of our community seems the wise thing to do. Is it a bit of a leap of faith to assume all of the projects in the package will come to positive fruition for the city? Yes, it is. For my part, I believe in the agencies being supported, and what their work means to our future. I hope that you can believe, too. Thanks for the questions.