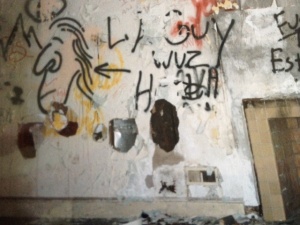 How much time did I spend in that abandoned home? Was it 15 minutes? 5 minutes? As clear as the memory is to me, you would think I had been in there for hours. It was a quick tour of an empty house, but with each passing second, it became increasingly evident that I had made a very bad decision in helping myself through the open window. It may have once been a home for a successful, prestigious family, but when I showed up for my pop-visit, it had been overtaken by homeless people: deranged homeless people who wrote on walls and left their dirty mattresses in strange places-like the bathroom. The more I investigated, snapping pictures in each room, the more my heart began to race. It was very likely that I was not alone in this huge 2-story home; I envisioned a drug-crazed lunatic around every corner. Clearly I was the lunatic for breaking in to this homeless hideout by myself. Even today, 20 years later, I can hardly believe that I safely escaped this mad adventure, even if it was only a few minutes of time. 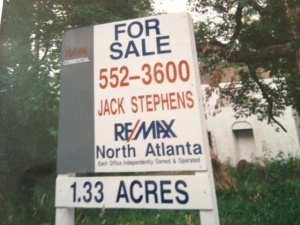 I had noticed the home on Lenox Road in Atlanta, and was intrigued by the beautiful but dilapidated structure located on such expensive real estate, surrounded by well-manicured properties. The For-Sale sign indicated the property was up for grabs, but the overgrown lawn and faded façade revealed a startling level of neglect. Each time I drove past it, my curiosity grew, and I wondered if the owner and real estate agent had forgotten about the house, leaving it to be overcome by weeds and vines. Perhaps the home was the victim of a nasty divorce, both sides running off to foreign countries with little concern for what became of the once-decadent property. It is common to see modest homes left alone to erode. A house of this stature, in this neighborhood, rotting on one of the busiest roads in Atlanta, Georgia….I was convinced that there had to be a cool story behind it. 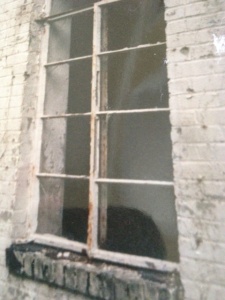 I’m not sure I planned to go inside the house on the day I pulled my car into the driveway. My original intention was merely to snoop around. I had my camera with me, so I started taking snapshots of the exterior, of the house sitting back from the road, shaded by large old trees that surely held memories of happier days. Moving closer to peek into the curtain-less window, I realized that it was open, the metal frame parted ever so slightly in the middle. I peered in to the quiet darkness of the living room. In that moment I was not afraid; I was excited. I was at that age when I craved adventure, and couldn’t wait to tell the story of breaking into an abandoned mansion. I’m sure I was crafting the story in my head as I crawled in, imagining my amazed audience in awe of my bravery. 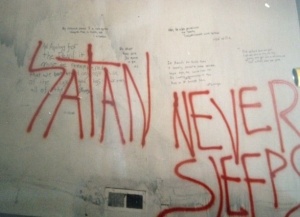 I forgot the audience immediately when my feet landed on the living room floor. I read the proclamation sprayed onto the wall next to the dusty fireplace. “Satan Never Sleeps” was written in huge, irregular letters. A makeshift bed lay ironically beneath the message. My camera started clicking and my adrenaline began to surge. I saw a doorway to my right, which opened to a room of such complete blackness that I snapped a picture but refused to enter. It would only be later, after the film was developed, that I would realize that the room had been the kitchen, badly burned in a fire. 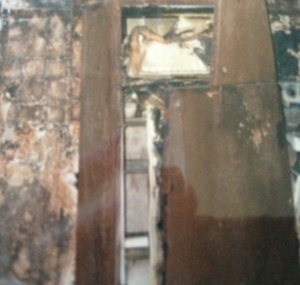 I continued my tour with a trip upstairs. The grand house had my favorite kind of staircase, the kind that winds and turns majestically, with indentions in the wall that would be perfect to showcase expensive vases. The now-empty indentions only showed peeling paint and accumulated grime, but it was easy to envision the home’s former grandeur, with the inhabitants gracefully making their way down these stairs to greet important visitors. On the second floor, the long hallway had windows with vines sneaking in much as I had, right through the middle. The first room I peeked into was a bedroom, clearly well-used by the new residents, with several dingy uncovered mattresses in disarray on the floor. It was at about this time in the tour when my panic began to build. How could such a well-used structure be empty right at that moment? Did I catch the homeless people during their one daily outing to the soup kitchen? It was mid-day, not overly warm or cool, so perhaps they were enjoying the weather. Maybe they were out in search of drugs or Satan literature. 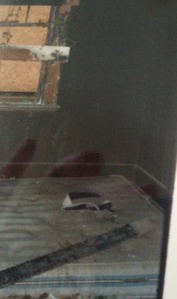 The next room was the bathroom, in a great state of decay, but clearly not being used for its original purpose. It appeared to be serving as a guest room, of sorts. I kept snapping pictures with each new discovery, knowing my time was limited. The room at the end of the hallway had a spray-painted message on the wall pointing to an open window, proclaiming “He’s Plumb Crazy”, as if Mr. Crazy had jumped out in a spontaneous moment. At this point I am in sheer panic, knowing only that I need to get myself spontaneously out of this house. I rushed down my beloved stairs and made a bee-line for the open window, breathing heavily and praying that the colorful inhabitants who currently reside in the house would stay away for just a few more minutes. I got into my car, locked it, started it up, and raced out of there. I thought I was so cool when I started on this adventure. I realized I was really so stupid. I was lucky to escape. 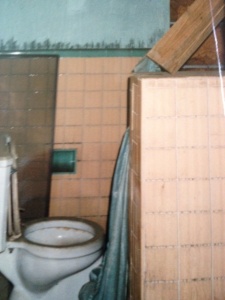 I never did find out the story behind that mansion, and how it became a haven for the wayward homeless. It was eventually sold and torn down, replaced by condos. I still always look in that direction when I drive down Lenox road, feeling as if the house had somehow been mine for awhile, for a few minutes in time when I adopted the home and imagined it in its prior splendor. I wonder if the homeless guys feel the same, missing their vine-ridden, spray-paint-decorated mansion. 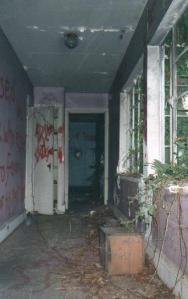